Doris supports two physical operators, one is Hash Join, and the other is Nest Loop Join.

As a distributed MPP database, data shuffle needs to be performed during the Join process. Data needs to be split and scheduled to ensure that the final Join result is correct. As a simple example, assume that the relationship S and R are joined, and N represents the number of nodes participating in the join calculation; T represents the number of tuples in the relationship.

N : The number of Instances participating in the Join calculation

The flexibility of the above four methods is from high to low, and its requirements for this data distribution are becoming more and more strict, but the performance of Join calculation is also getting better and better.

There are two requirements for the applicable scenarios of Runtime Filter:

When the above two conditions are met, turning on the Runtime Filter can achieve better results

When the Join column is the Key column of the left table, the RuntimeFilter will be pushed down to the storage engine. Doris itself supports delayed materialization,

Delayed materialization is simply like this: if you need to scan three columns A, B, and C, there is a filter condition on column A: A is equal to 2, if you want to scan 100 rows, you can scan 100 rows of column A first, Then filter through the filter condition A = 2. After filtering the results, read columns B and C, which can greatly reduce the data read IO. Therefore, if the Runtime Filter is generated on the Key column, and the delayed materialization of Doris itself is used to further improve the performance of the query.

Once the database involves multi-table Join, the order of Join has a great impact on the performance of the entire Join query. Assuming that there are three tables to join, refer to the following picture, the left is the a table and the b table to do the join first, the intermediate result has 2000 rows, and then the c table is joined.

The above 4 steps basically complete a standard Join tuning process, and then it is to actually query and verify it to see what the effect is.

If the first 4 methods are connected in series, it still does not work. At this time, it may be necessary to rewrite the Join statement, or to adjust the data distribution. It is necessary to recheck whether the entire data distribution is reasonable, including querying the Join statement, and some manual adjustments may be required. Of course, this method has a relatively high mental cost, which means that further analysis is required only when the previous method does not work. 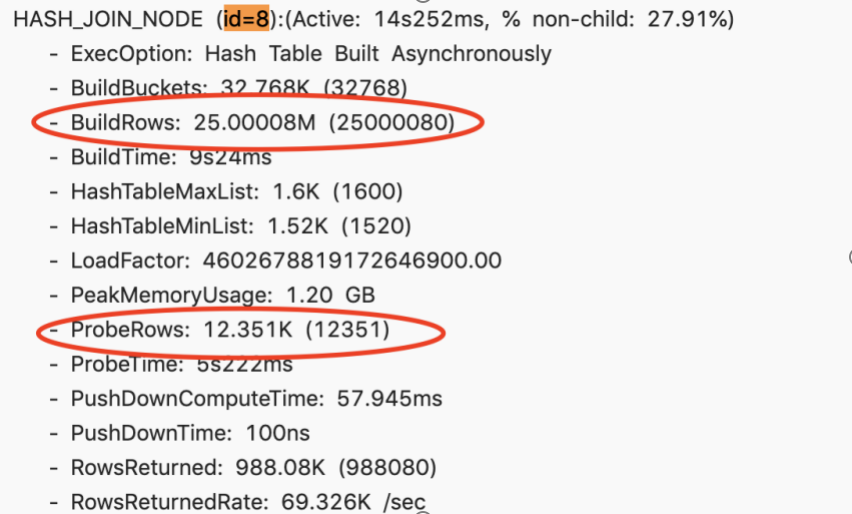 After further analysis of Profile, it is found that BuildRows, that is, the data volume of the right table is about 25 million. And ProbeRows (ProbeRows is the amount of data in the left table) is only more than 10,000. In this scenario, the right table is much larger than the left table, which is obviously an unreasonable situation. This obviously shows that there is some problem with the order of Join. At this time, try to change the Session variable and enable Join Reorder.

This time, the time has been reduced from 14 seconds to 4 seconds, and the performance has been improved by more than 3 times.

At this time, when checking the profile again, the order of the left and right tables has been adjusted correctly, that is, the right table is a large table, and the left table is a small table. The overhead of building a hash table based on a small table is very small. This is a typical scenario of using Join Reorder to improve Join performance. 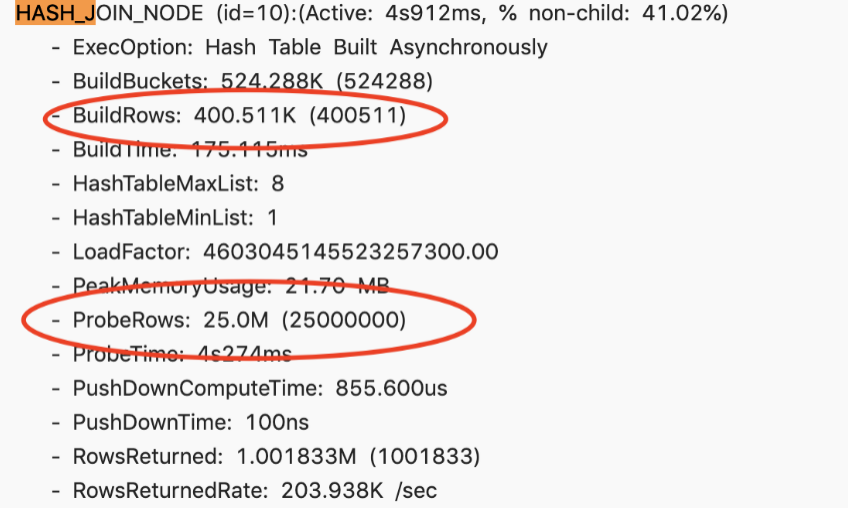 There is a slow query. After viewing the Profile, the entire Join node takes about 44 seconds. Its right table has 10 million, the left table has 60 million, and the final returned result is only 60 million. 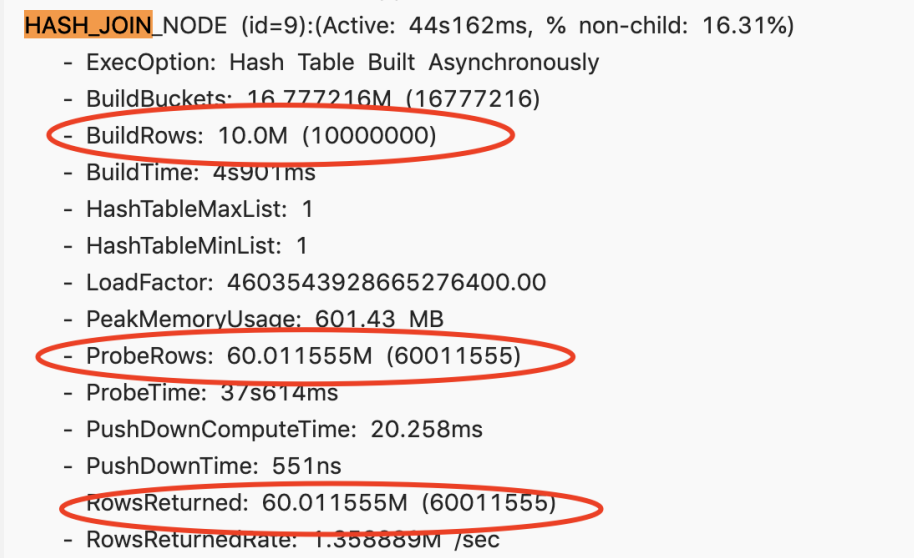 When the right table exceeds 1024 rows, IN will not take effect, so there is no filtering effect at all, so try to adjust the type of RuntimeFilter.

This is changed to BloomFilter, and the 60 million pieces of data in the left table have filtered 59 million pieces. Basically, 99% of the data is filtered out, and this effect is very significant. The query has also dropped from the original 44 seconds to 13 seconds, and the performance has been improved by about three times.

The following is a relatively extreme case, which cannot be solved by tuning some environment variables, because it involves SQL Rewrite, so the original SQL is listed here.

This Join query is very simple, a simple join of left and right tables. Of course, there are some filter conditions on it. When I opened the Profile, I found that the entire query Hash Join was executed for more than three minutes. It is a BroadCast Join, and its right table has 200 million entries, while the left table has only 700,000. In this case, it is unreasonable to choose Broadcast Join, which is equivalent to making a Hash Table of 200 million records, and then traversing the Hash Table of 200 million records with 700,000 records, which is obviously unreasonable.

Why is there an unreasonable Join order? In fact, the left table is a large table with a level of 1 billion records. Two filter conditions are added to it. After adding these two filter conditions, there are 700,000 records of 1 billion records. But Doris currently does not have a good framework for collecting statistics, so it does not know what the filtering rate of this filter condition is. Therefore, when the join order is arranged, the wrong left and right table order of the join is selected, resulting in extremely low performance. 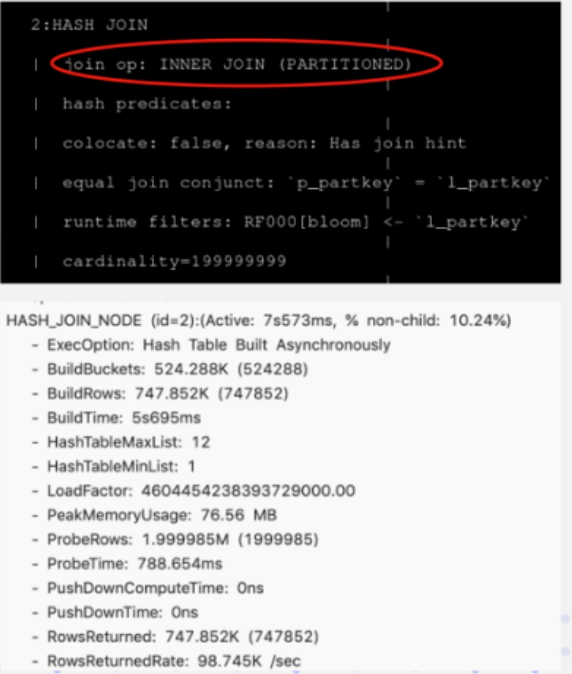 Finally, we summarize four suggestions for optimization and tuning of Doris Join: